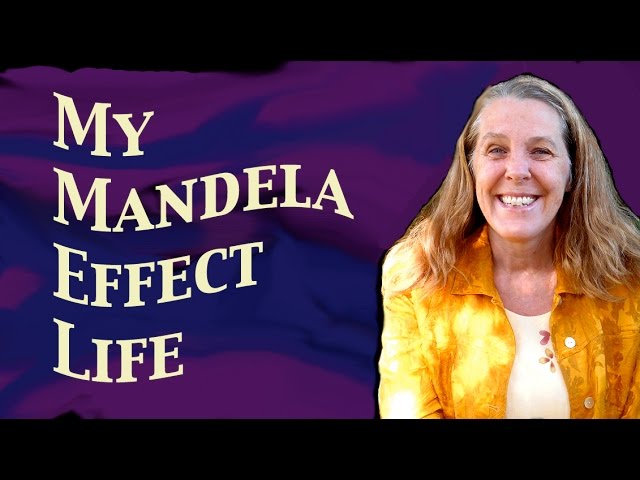 http://www.realityshifters.com – I’ve been delighted to see the “Mandela Effect” rocket from being a fairly obscure topic in 2010 to a matter of steadily increasing attention in 2016, since I’ve devoted my career to researching discontinuities, shifts, and jumps in reality. In case you’re wondering why I dedicate my life’s work to these topics, here is a short explanation of why I do the work I do.

I’ve noticed mind-matter interaction since childhood, though I noted this perspective was not mainstream in California in the 1960s when I was growing up. When I was a young girl watching rain falling in the garden outside our house, I noticed that when I was in a certain state day-dreamy state of mind, I could think “Stop rain,” and the rain would stop, and “Start rain,” and the rain would start. After testing this to my satisfaction several times, I ran with great excitement to show this discovery to my mother, who greeted my announcement with a sigh of resignation and evident apathy. Unable to demonstrate for my mother what had been working perfectly just moments earlier, I recognized the power that each of us has to effect mind-matter influence within supportive ‘zones.’ I subsequently made sure that I was quiet about it any time I helped our family’s car to start (back in the 1960’s, it was a relatively common occurrence for cars to not start every time), or other such things. Clearly, mind-matter interaction was not considered to be possible–yet in my daily personal life I constantly found it to be one of the most consistently reliable and supportive pillars upon which I can dependably rely.

In retrospect, I can see I had numerous “Mandela Effect” type experiences while growing up, such as the time in the 1970s following one of my family’s vacations to beautiful Dal Lake, India, when the furniture my parents had ordered finally arrived in California, was assembled and fitted with custom-made glass tops. I reminded my parents that they had promised the woodcarvers at Dal Lake that they would send photographs of the tables in our new home. My parents seemed surprised and confused at my insistence they should take and sent photographs, and I became confused, too, since my parents don’t lie, and always keep their promises. I knew I wasn’t remembering incorrectly, yet I trusted they were not lying to me, either–so I ‘let it go’ without forgetting this bizarre difference in remembered histories had occurred.

One of the main reasons I obtained a degree in physics from UC Berkeley was to get closer to the heart of the true nature of reality, after observing mind-matter interaction since childhood. Thanks to my lifelong fascination in the true nature of reality and consciousness, I decided the closest thing to a degree in those topics would be Physics, so I applied to and was accepted to the Physics program at UC Berkeley in the 1980s, and I especially loved my quantum physics classes. I am honored to have received a degree in Physics from UC Berkeley.

In 1994 I experienced a surge in what at the time I called ‘reality shifts,’ involving noticing things appearing, disappearing, transforming and transporting, as well as changes in the experience of time. In the process of exploring this topic and through my intention to experience a wide variety of these shifts, I found myself quickly doing exactly that. I observed many reality shifts without confirmation or validation from other witnesses, but found that shared reality shift experiences to be more enjoyable, since they provided the opportunity to discuss what happened. My searches for information on this topic across the very new world wide web came up empty as I began writing my book, Reality Shifts: When Consciousness Changes the Physical World to describe my observations of celebrities and a pet cat having been reported dead, and subsequently being observed to be very much alive. I included descriptions of how a bird feeder changed without anyone touching it between being empty and full, how the material of a jacket changed without anyone modifying it, and how a children’s book illustration from a book I read to my daughter every week changed to something completely different. Reality Shifts includes first-hand reports of conversations being remembered differently by people involved, and about a person’s name vanishing off a conference speaker’s list between the time of sitting down one morning and a subsequent break. Also included is a description of repeating events, similar to what people would later recognize as a ‘glitch in the Matrix.’ I published the first edition of Reality Shifts in 1999 in a three ring binder, which I made available to people attending my talks and workshops, and later sold through CafePress.

You can read the companion blog post to this video blog in its entirety at: http://wp.me/pbqQk-Sa