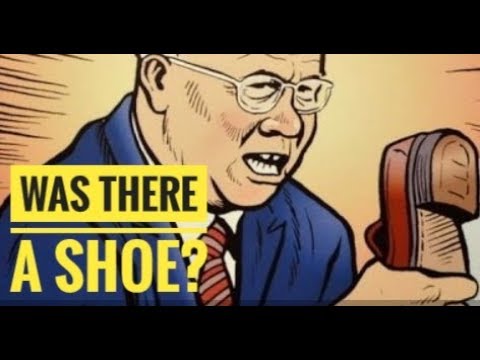 Before watching the video – see if you can recall the “shoe banging” incident at the UN by Soviet leader Nikita Khrushchev. Chances are, your recollection may be different to views contained in this short doco.

The term “Mandela Effect” refers to a reasonably new phenomenon whereby different groups of people remember the same things or events differently. While it has largely been dismissed as tricks of the mind – in the deep corners of the internet, one can find various hypotheses as to what may cause this. From the benign explanation of memory tricks – all the way to “augmentation of reality” by the scientists at CERN. Some famous examples of the Mandela Effect include JFK’s vehicle, a different ending to the Queen song “We are the Champions”, and others.

The point of this video is not to get bogged down in conspiracy theories – what interested me was that I too remember Khrushchev banging his shoe at the UN podium. I don’t recall where I had seen it but this version of events is disputed by someone that was there in person – Khrushchev’s translator. I am confused how I can possibly recall something that didn’t happen.

This doco features a mysterious video with no sound or source that claims to be “the real video” of Khrushchev banging his shoe at his UN desk (albeit not the UN podium). Upon closer examination, the people pictured do not really look like Khrushchev or Gromyka – they have only a vague resemblance. Having read the comments to the video on the channel that it came from, it appears this scene may be from a foreign film that depicted the events, but it is not named.

Do you recall the “shoe-banging” incident?