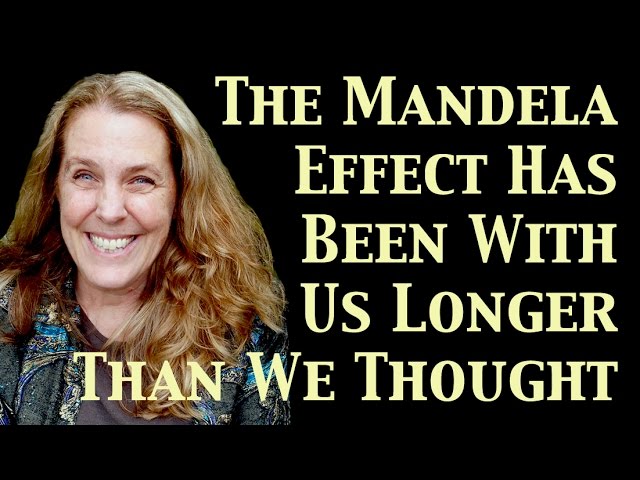 The Mandela Effect has been with us longer than we thought

www.realityshifters.com – I’ve received lots of emails along the lines of, “I’ve noticed changes for years, but it was only this year I found out thousands of other people have noticed the same changes,” which gets me to wondering how long the Mandela Effect has been around.

My preferred explanation for all this is that we are observing quantum phenomena on the macroscopic scale, and there is no ‘von Neumann cut’ where we can start disregarding quantum effects. Quantum discontinuities can (and do) occur at every level.

One of the main reasons the “Mandela Effect” is grabbing peoples’ attention is that it is bigger than Mandela. The “Mandela Effect” shows those of us who’ve experienced it that facts change, and histories change. Not everyone remembers things the same way, and sometimes we also notice things change from what we remembered, and then change back again–sometimes flip-flopping more than once or twice.

We can look to quantum physics for an explanation as to what is going on when we find more examples of the Mandela Effect. Rather than there being some imaginary line of demarcation where quantum weirdness no longer occurs, some physicists now suggest that quantum logic might hold true at all levels. Rather than ignoring such troublesome quantum phenomena as superposition of states and entanglement by sweeping them under the von Neumann cut, we instead need to consider the possibility that sometimes we will see macroscopic evidence of quantum phenomena in our daily lives.

The existence of alternate pasts was predicted by scientists such as Stephen Hawking, who has sought evidence of vibratory signatures of many possible ‘big bangs,’ for example. If and when you ever personally experience the presence of multiple possible pasts, such as some college students witnessed first-hand when looking at their own hand-written journal notes about where they were and what they were doing when the Challenger space shuttle exploded–then you might reconsider the notion of a news media or government conspiracy.

CERN came along after the fact, from the standpoint that first nations peoples have long described oral histories about how these same sorts of things (so-called “Mandela Effect”) have been happening since the dawn of time. We can see evidence of the Mandela Effect in years before we heard of it, when we remember times such as I recall having happened to me back in the 1970s, when I wanted to hear a song that I’d been hearing a lot on the radio. I couldn’t find the song any more, and it was as if it had completely disappeared without a trace. Then, many months later, I did hear the song being announced by a radio station as ‘likely to be a big hit’ as they bragged they were amongst one of the first stations able to play it. I heard this and thought to myself, “What!?! This song was being played almost nonstop by many stations earlier this year!” So if you’ve ever seen a movie or TV show or heard a song or read a book before it came out, you’ve had an earlier experience with the Mandela Effect.

Thomas Kuhn wrote that a paradigm defines “the practices that define a scientific discipline at a certain point in time.” When we notice that there is a strong possibility we are witnessing macroscopic signs of quantum phenomena as some of us recognize that we’ve been experiencing ‘glitches’ and shifts in reality for years, it becomes clear that rather than a conspiracy, we’re dealing with a radical re-visioning of reality. Thomas Kuhn described how there are four basic ways that a new paradigm influences the scientific process, because paradigms dictate: what is studied and researched, what types of questions are asked, the exact structure of the questions asked, and how research results are interpreted. Thanks to the work of physicists such as Stephen Hawking and Thomas Hertog suggesting back in 2006 that we might live in a “top down” universe which prohibits single histories, people are increasingly becoming more familiar with the idea that we exist in a superposition of states–such as in a holographic multiverse, where we can sometimes experience various other possible realities. Nature magazine reported Thomas Hertog stating,

You can read the companion blog article to this video in its entirety at: http://wp.me/pbqQk-SY