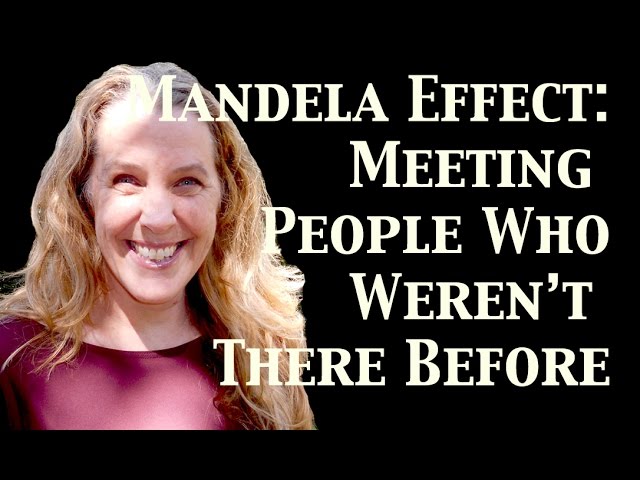 Mandela Effect: Meeting People Who Weren’t There Before

http://www.RealityShifters.com — When we contemplate the relatively large number of first-hand accounts of seeing people alive again after previously having been reported deceased (eg: “Mandela Effect”), we might suspect we would also occasionally notice people showing up who we’re certain weren’t there before. I remember hearing the news of Nelson Mandela’s death when he was incarcerated many years ago, and again more recently. I also recall having heard news through the international news media of Jane Goodall’s passing away, shortly after Dian Fossey died, which struck me as such a senseless double loss of great primate researchers in such mysterious rapid succession–yet I was thrilled to learn she is still alive and well this past year, so I was able to see her give a talk in the San Francisco bay area when she came through on a recent book tour.

So if a person who we’re fairly sure has died can be alive again, why can’t a person we’ve never before heard of suddenly appear? There is a satisfying kind of logic to this phenomena, in the sense that just as one might suddenly find a lost item in an unexpected place, it’s just as possible to find a new person in our lives just when we need them most.

People Have Noticed I Wasn’t There Before

Over the past year, I’ve heard from two different individuals that I came into their lives as if out of nowhere. Both of these people separately told me, “If you had existed, doing what you’re doing, I would have known.” When conversing with me about the possibility that I hadn’t existed in previous realities, one person exclaimed last summer, “It may interest you to know that apparently you didn’t exist (at least not in your current version) in the timeline I came from;; because if you had, I would have heard of you A LONG TIME AGO!” I replied, “How fascinating that you hadn’t come across me, so I’d tend to agree with you that in previous realities you’ve come from, I didn’t exist as I do here. Cool!”

A second person told me she’d found me in January of this year, when she suddenly realized we’d been friends on facebook for quite some time, and had mutual friends. She felt certain that I’d popped up out of the blue, as it were, since she was positive she’d have contacted me much sooner. So now two people were both telling me within the last year that essentially they’re both fairly certain they’d been in realities in which I had not been writing books, publishing a newsletter, and conducting research in the field of reality shifts, quantum jumps, and consciousness.

One of My Favorite Quantum Cosmologists Appeared Out of the Blue

Part of the reason that these revelations from others that, “You didn’t exist before!” aren’t overly disconcerting to me is that I have had similar experience with this phenomenon. Even though I’ve heard trusted individuals, such as my daughters, or close friends, telling me they’ve seen me somewhere I know I hadn’t been (though typically I’d been daydreaming of being there), people showing up out of the blue seemed different. The difference mostly can be summed up as I can’t envision a world without me in it–or at least without a me who I’ve so come to know and love! I’ve had a similar experience with UC Berkeley’s Dr. Yasunori Nomura, who I first came across many months after having written my book, Quantum Jumps.

What’s so surprising to me about finding Dr. Nomura is that I did not come across any of his papers having to do with the Many Worlds of quantum physics being one and the same as the multiverse, despite my in-depth quest to find such papers while conducting research for my book, Quantum Jumps. This is surprising to me, since I conducted a very thorough research search of original papers written in the field of quantum physics and quantum cosmology, and because Dr. Nomura is an especially prolific writer of top-notch papers in these fields that I’d been researching so extensively. Not only has he written an excellent paper on the subject of my greatest interest, but he is now shown to be the first to have published his ideas about the many worlds of quantum physics being the same as the multiverse, back in 2011. I appreciate his papers both for their clarity of presenting complex material, and for the way he utilizes graphics to help get his points across, and I loved interviewing him recently about his research work and ideas.

How Can this be Useful?

We can ask ourselves, “How good can life get when people show up out of the blue?” and discover the answer can be, “Very good, indeed,” since people are the true treasures in our lives. Finding a mentor, mate, friend, colleague, or partner just when you need them most can be one of the greatest blessings we could ever possibly receive.

The full companion blog post to this video is posted at:
Meeting People Who Weren’t There Before